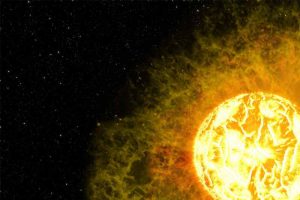 The universe is a strange yet amazing place. Although humanity is only in the very early stages of its exploration, we are uncovering its secrets step by step. The understanding of stars, solar systems and galaxies is of great importance. Thus, we can better understand our place in the universe. The study of stars, their evolution, their life and their death is a key element for astronomers. Researchers from Liverpool John Moores University and the University of Montpellier have developed a warning system that signals when a massive star is about to go supernova.

According to this new study, massive stars (typically weighing 8 to 20 solar masses) become a hundred times fainter in visible light. This happens in the last months before their death. At this time, the stars are in their last phase of life, known as the “red supergiant” phase. The fading is due to a buildup of debris around the star, which obscures its light. Until now, the accretion rate of a star was unknown. The researchers simulated what the red supergiants might look like when enclosed in these “cocoons” before the explosion. Archives of old telescopes contain images of stars that exploded a year after they were taken. As you can see in these pictures,

Thus, the cocoon could be assembled in less than a year, with a very fast turnaround time. Benjamin Davies, lead author of the paper from Liverpool John Moores University, explains that the dense material almost completely obscures the star, making it appear 100 times dimmer. “That means the day before the star exploded, you probably wouldn’t be able to see it’s there,” he explains .. The only time scientists are able to observe supernovae in detail is after they appear. Thanks to this early warning system, scientists will be able to observe the destruction of precursor stars in real time. To do this, many telescopes on Earth and in space can be used. The research has been published in the Monthly Notices of the Royal Astronomical Society.