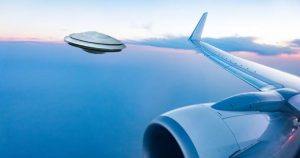 Azul pilots, who were on a commercial flight from São Paulo/SP to Porto Alegre/RS, reported seeing a strange light when passing over Santa Catarina, on Saturday night, October 22nd. What intrigues aviation is that there was no other aircraft on the radars in the same region.

The professional’s conversation with the air traffic control tower was recorded by a live broadcast, which captures communications from the region’s airspace control sectors, while showing the movement at Salgado Filho International Airport, in Porto Alegre.

Thus, as can be seen in the recording below, when Azul flight 4517 was passing over Santa Catarina, around 10:30 pm, the transmission captured several moments of the pilots’ communication reporting the sighting of a light, and neither they nor the flight controllers air traffic, they had on their radars some other plane that corresponded to what was seen.

Later, the air traffic controller informs the pilots that it would pass on the air defense contact number, so that they would pass on as much information as possible about the sighting. The information is from the Aeroin website, specialized in aviation. So far, no explanation has been given for the sighting.