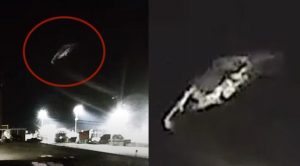 I initially was very skeptical of this video for obvious reasons. It’s looks like a very large object that just seems to be floating across the sky over Raytown, Missouri on Thursday night, October 13, 2022. Here’s what the eyewitness said about it:

The doorbell camera video shows the object from 2 different perspectives. Watch closely on the 2nd one and you’ll see that the object really does project some light through the trees.

I checked the National UFO Reporting Center website and don’t see any corroborating reports of this sighting there yet, but it does normally take a few weeks before new objects are posted.

It’s worth noting that when videos like this are faked, you’ll rarely see an object from 2 different perspectives. In this case, both line up exactly. If the object were to just suddenly disappear, you know you might be dealing with multiple video layers.

Another possibility is that the alleged UFO is just a reflection in the camera of an object moving along the road but the fact that this object can be seen giving off light through the tree to me makes it a much more legitimate video to examine and consider as a UFO that needs to be investigated.

It’s another video that makes you wonder what exactly is flying across Missouri and what is its intention. Is it something/someone innocent or sinister?