The Anunnaki (also written Anunna, Anunnaku, Ananaki, and various spellings) are a Sumerian, Akkadian, Assyrian, and Babylonian deity group. Zecharia Sitchin was an American novelist born in Azerbaijan who promoted a theory for human origins including ancient astronauts in his works. Sitchin claims that the Anunnaki, a species of extraterrestrials from a planet beyond Neptune known as Nibiru, were responsible for the establishment of Sumerian society.

He thought that Nibiru, a fictional planet in the Solar System, was in an extended, elliptical orbit and that Sumerian mythology reflected this belief. Sitchin’s works have been translated into over 25 languages and have sold millions of copies throughout the world. Scientists and academicians reject Sitchin’s beliefs, dismissing them as pseudohistory and pseudoscience. Sitchin’s work has been chastised for its poor methodology, mistranslations of ancient writings, and false astrological and scientific claims. Sitchin espoused hypotheses in which alien occurrences allegedly had a substantial part in early human history, similar to earlier authors such as Immanuel Velikovsky and Erich von Däniken. According to Sitchin’s interpretation of Mesopotamian imagery and symbolism, which he presented in his 1976 book “The 12th Planet” and its successors, there is an unknown planet beyond Neptune that orbits the inner solar system in a lengthy, elliptical orbit every 3,600 years. Nibiru is the name of this planet.

According to Sitchin, Nibiru (whose name was changed to MARDUK in original legends by a Babylonian ruler of the same name in an attempt to co-opt the creation for himself, causing some confusion among readers) collided catastrophically with Tiamat (a goddess in the Babylonian creation myth the Enûma Eli), which he believes was once located between Mars and Jupiter. The planet Earth, the asteroid belt, and comets are thought to have been formed as a result of this collision. 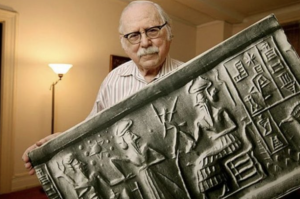 According to Sitchin, Nibiru (dubbed “the twelfth planet” because the Sumerians’ gods-given conception of the Solar System counted all eight planets, plus Pluto, the Sun, and the Moon) was the home of a technologically advanced human-like extraterrestrial race known as the Anunnaki in Sumerian myth, who Sitchin claims are known in Genesis as the Nephilim. They developed when Nibiru entered the solar system and first landed on Earth 450,000 years ago, hunting for minerals, particularly gold, which they discovered and mined in Africa, he said. 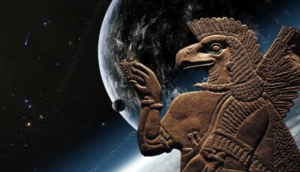 According to Sitchin, ancient writings claim that these “gods” guided the establishment of human civilization in Sumer, Mesopotamia and that human royalty was established to serve as intermediaries between humans and the Anunnaki (forming the “divine right of kings” idea). Sitchin argues that the “bad wind” mentioned in the Lament for Ur, which destroyed Ur circa 2000 BC, is the fallout from nuclear weapons used during a conflict between alien groups. According to Sitchin, the year is 2024 BC. Sitchin claims that his findings are in agreement with many biblical scriptures and that biblical texts are derived from Sumerian literature. Sitchin’s work has been criticized particularly in three categories: 1) ancient text translations and interpretations, 2) astronomical and scientific observations, and 3) myth literalism. Translations and interpretations are two different things. Only professionals could read Sumerian when Sitchin authored his works, but materials like the 2006 book Sumerian Lexicon have made the language more accessible to non-experts. Michael S. Heiser, an ancient language specialist, claims to have discovered several flaws in Sitchin’s translations and challenges interested parties to utilize this book to verify their accuracy. Professor Ronald H. Fritze, author of “Invented Knowledge: False History, Fake Science, and Pseudo-religions,” cites Sitchin’s claim that the Sumerian sign Din-Gir means “pure ones of the blazing rockets,” and says that “Sitchin’s assignment of meanings to ancient words is tendentious and frequently strained.” “When opponents have investigated Sitchin’s sources, they have discovered that he frequently cites out of context or truncates his statements in a way that distorts facts in order to establish his contentions,” Fritze said of Sitchin’s methods. Anything is given selectively, and evidence that contradicts it is omitted.” Sitchin’s arguments are based on his own readings of pre-Nubian and Sumerian writings, as well as the seal VA 243. Sitchin said that these ancient civilizations were aware of a twelfth planet, but they were only aware of five. Hundreds of Sumerian astrological seals and calendars have been deciphered and documented, with each seal containing a total of five planets. Sitchin recognizes 12 spots on Seal VA 243 as planets. Seal VA 243 is supposed to be a communication from a lord to a servant since it reads “You’re his Servant” when translated. The socalled sun on Seal VA 243, according to semiologist Michael S. Heiser, is a star, not the Sumerian sign for the sun, and the dots are likewise stars. The sign on seal VA 243 has little relation to the hundreds of Sumerian sun emblems that have been discovered. Roger W. Wescott, Professor of Anthropology and Linguistics at Drew University in Madison, New Jersey, criticized Sitchin’s amateurishness with regard to the predominance of the Sumerian language in a 1979 review of The Twelfth Planet:

Sitchin’s linguistics, like his anthropology, biology, and astronomy, appears to be incompetent. For example, he claims on page 370 that “all the ancient languages… including early Chinese… derived from one primal source – Sumerian.”

Sumerian is, of course, the virtual paradigm of what linguistic taxonomists refer to as a languageisolate, or a language that does not belong to any of the well-known language groups or have obvious cognition with any other language. Even if Sitchin is referring to written rather than spoken language, his claim is unlikely to be convincingly defended, given that Sumerian ideograms were preceded by European signators such as the Azilian and Tartarian, as well as a variety of script-like notational systems between the Nile and Indus rivers. The literature composed in the Sumerian language during the Middle Bronze Age is known as Sumerian literature. The majority of Sumerian literature has been preserved through Assyrian or Babylonian copies. The Sumerians established the earliest writing system, evolving Sumerian cuneiform writing from earlier proto-writing systems around the 30th century. Around the 27th century BC, the first written texts appear. Even after the spoken language vanished from the populace, the Sumerian language continued in official and literary usage in the Akkadian and Babylonian empires; literacy was widespread, and the Sumerian books that students copied profoundly affected later Babylonian literature. Sumerian literature was not directly passed down to us but was rediscovered via archaeology. Despite this, the Akkadians and Babylonians took heavily from Sumerian literary traditions and carried them throughout the Middle East, influencing much of the subsequent literature, including the Bible. Sitchin was born in Baku, Azerbaijan SSR, on January 11, 1920, and died on October 9, 2010, at the age of 90.

Post Views: 100,168
Tags: The Ancient Anunnaki Beings And The Mysterious Planet Nibiru: How The Earth And We Were Created