Rumours suggest that a civilisation advanced on Mars once existed. Due to a catastrophic occurrence, they were forced to leave Mars and travel to Earth. Ufologists believe that they have evidence supporting this theory. Some ruins found on Mars that look eerily like a Japanese mausoleum would be the first piece of evidence. A ufologist claims that the same keyhole-shaped mound found on Mars can also be found in Japan’s Kofun tomb, suggesting that an extraterrestrial culture may have contributed to the creation of the Japanese civilization. 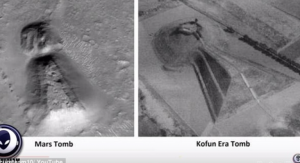 These structures may suggest a link between Mars, Earth, and possibly an extraterrestrial civilization. However, NASA officials have said that these similarities are purely coincidental. It is possible that the building on Mars could have grown organically. NASA’s explanation appears plausible, particularly when we consider pareidolia. (Pareidolia refers to the psychological response to seeing faces and other meaningful elements in random stimuli. It is important to note that this evidence does not prove that extraterrestrial civilisations did exist on Earth in the distant past. This latest discovery could indicate that the structure found in Japan was used as a burial site for the elite, while it was the mausoleum of a Martian noble or king