A UFO, believed to be up to 25 times the size of Earth, has been spotted emerging from the Sun, according to alien hunters. 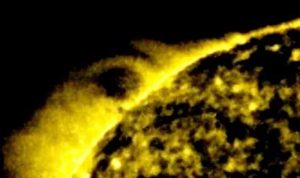 By analyzing images from NASA’s SOHO (Solar and Heliospheric Observatory) satellite, alien hunters believe they have spotted a huge UFO near the Sun. What appears to be a huge flare coming from the side of the Sun is actually a UFO so huge it almost defies comprehension. According to prominent alien hunter Scott C Waring, the supposed UFO is at least 25 times larger than Earth.

Mr Waring also believes the UFO originated from the core of the Sun, where it feeds on the immense energy of our host star.

The UFO enthusiast said on his ET Database blog: “I caught a giant black orb coming out of our sun in SOHO footage today. The images are actually from June 27, but are still believed to be current for an unknown reason. The black sphere is over 25 times the size of the earth and stays there for a few hours before moving away. 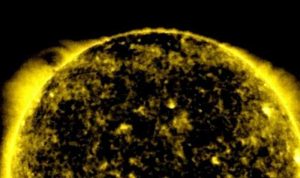 “It’s certainly possible that it’s material from the solar mantle that’s being pushed out, but if it is, it should burn and glow a bit more, but it’s not.” »

“There is therefore a strong chance that his black sphere was in fact an alien spacecraft or space station which occupied a hollow space in our sun and which was then seen to come out. »

“I call it the hollow sun theory, and it answers many of our burning questions about why UFOs are seen around our sun and leave our sun so often. »

Scientists who have worked for NASA in the past have a much simpler explanation for all the reported bizarre UFO sightings. 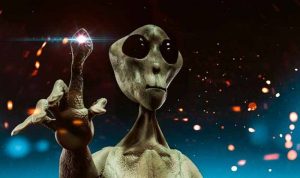 According to former NASA engineer James Oberg, most UFO sightings are nothing more than “space film” floating in front of cameras.

These films can be flaking bits of paint that drift aimlessly in weightlessness, flakes of ice, or the insulation of a spacecraft that has ruptured.

He said: “I have had enough experience with actual spaceflight to realize that what is seen in many videos is nothing but the ‘norm’ of quite phenomena. mundane events occurring in non-terrestrial environments”.

Mr Oberg argued that the human brain is not wired to understand these tiny objects floating above the Earth.

Translation of The Express by Astro Univers