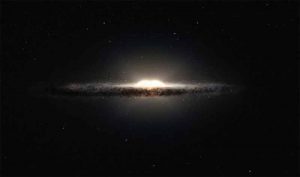 Astronomers using data from the GAIA telescope have found that our galaxy’s outermost disk, the Milky Way, is vibrating.

An international team led by scientists from Lund University in Sweden has discovered that the outer disk of the Milky Way is vibrating. Scientists used data from the Gaia space telescope to make this discovery. But before we think about aliens and all that, the ripples scientists have identified were caused by a dwarf galaxy, now stuck in the constellation Sagittarius. During its passage hundreds of millions of years ago, this galaxy shook the Milky Way. There are between 100 and 400 billion stars in our cosmic home, the Milky Way, and hundreds of billions of planets within it. According to our best estimates, there are between six and ten billion Earth-like planets.

According to astronomers, the galaxy we live in emerged from a spinning cloud of hydrogen and helium 13.6 billion years ago. Stars, like our sun, are formed as a result of the accumulation of gas in a rotating disk over billions of years. New research published in Monthly Notices of the Royal Astronomical Society describes stars in the outer regions of the galactic disk. “We can see that these stars are wobbling and moving up and down at different speeds. When the Sagittarius dwarf galaxy passed the Milky Way, it created wavelike motions in our galaxy, much like dropping a stone into a pond,”says Paul McMillan, the Lund Observatory astronomy researcher who led the study . Scientists were able to examine more of the Milky Way’s disk using data collected by Europe’s Gaia space telescope.

Through measurements of the ripples in different parts of the disk, researchers have begun to piece together clues to the history of Sagittarius and its orbit around our galaxy. According to Paul McMillan, the Sagittarius dwarf galaxy was significantly larger 1 to 2 billion years ago, and was possibly around 20% of the mass of the Milky Way. Data from Gaia has allowed researchers to study an astonishing amount of the Milky Way. Since 2013, the telescope has measured about two billion star movements across the sky and 33 million star movements moving towards or away from us. Geologists use the seismic waves that pass through the Earth to study Earth’s structure, and this new discovery allows us to do the same with the Milky Way.