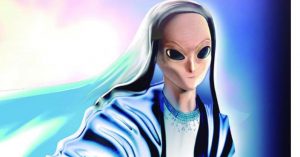 Based on historical evidence, researchers argue that the Fatima mystery is just a UFO occurrence.
Credits: ALEXANDRE JUBRAN
Marian apparitions, as supposedly visions of the Virgin Mary by one or more people became known, are a sensitive subject for both the Catholic Church and Ufology. The Church has a whole protocol for recording and researching these apparitions before accepting them as true, and just to give the reader an idea of ​​how demanding the process is, of the two thousand occurrences already recorded, only 16 were accepted as real. . For Ufology, research is not easy either, since it is dealing directly with people’s faith and one has to be very careful with witnesses and interviewees so as not to create friction. Anyway, as Ufology sees these manifestations from a totally different angle,Here, we will analyze some details of the most famous of the Marian apparitions, the one that took place in the city of Fátima, in Portugal, where today there is a large sanctuary that welcomes pilgrims from all over the world. Many people seek cures for serious illnesses there and there are many miracles attributed to the Virgin Mary, also known as the Lady of Fátima. The point is to try to understand what really happened there. Fatima was the scene of some cosmic events that shook the world at the beginning of the last century and that fuel a long controversy that lasts until today. On October 13, 1917, about 70,000 people witnessed a phenomenon that was considered to be a manifestation of the power of God. That day it was raining, but suddenly the sun appeared in the sky. What appeared to be a flat disk,

The unusual phenomenon had already made a preparation in previous years, in the form of isolated signs in the sky and visits of what were considered angels. In all cases, three children were at the epicenter of events and had significant contact with a cosmic entity, immediately hailed by the Vatican as the Virgin Mary — a belief maintained and encouraged among its faithful to this day. Lúcia de Jesus and the brothers Francisco and Jacinta Marto, respectively 10, 9 and 7 years old at the time, were protagonists of contacts with something supernatural in a total of six meetings, always on the same day and time over six months.

According to a group of Catholic historians, the celestial entity would have made revelations to young people about our world. They would be messages intended for all humanity, but from the beginning the Church took hold of them and monopolized them, judging what should be divulged or published. And the Church was also responsible for the sacralization of the event and for the generation of the widespread religious image, transforming the event into a divine manifestation in the service of its own belief. Scholars complain to this day about the Vatican’s procedure, claiming that it has no right to withhold the true information about the case forever and to itself. They claim that ascended beings do not belong to any religion and that they do not operate according to beliefs or dogmas. They say, still,

Despite the noisy dispute over how the Church manipulated the Marian apparitions of Fatima, the fact is that contacts with similar entities – in other cases also called the Virgin Mary – continued to occur in all parts of the world, repeating more or less the same message passed. to Portuguese seers. In particular, the Marian apparitions of Medjugorge, in the former Yugoslavia, now Bosnia and Herzegovina, intensified for some time. According to some contactees, such as the stigmatized Italian Giorgio Bongiovanni [See box], the content of the third and final message from Fátima would be a warning about the future of the human species and an incentive to seek a new spiritual path for man.

Post Views: 100,148
Tags: The Mystery of Fatima in the Light of UFO Research