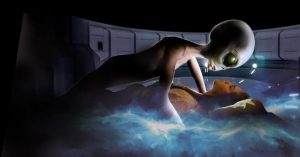 Is it acceptable to assume that there is some genetic compatibility between humans and extraterrestrials, to the point that a miscegenation between species is possible?
Credits: RAFAEL AMORIM, EXCLUSIVE FOR UFO MAGAZINE

Recognized studies point out that the living creature on Earth that is genetically closest to humans is the chimpanzee, whose difference with our species is only 2%. However, this mere 2% is enough for us and them to have immensely divergent physical and intellectual characteristics — it is even enough for there to be no compatibility of miscegenation between our races. So, what to think about beings from other planets, which may be evolutionarily many centuries or millennia ahead of us, having sexual relations with humans, as shown by the world ufological casuistry, where such occurrences abound?

Is it acceptable to assume that there is some genetic compatibility between humans and extraterrestrials, to the point that miscegenation between our species is possible? Why, then, do they insist on such a practice with many of their abductees, both male and female? At the beginning of this discussion, it is important to understand that we do not know for sure who our visitors are, where they come from and what they want here — just as we do not have any idea about their cultures and scientific knowledge. Thus, it is difficult to speculate about its capabilities and limitations in terms of genetic engineering, but the task is necessary. Such entities may have such advanced knowledge of the structures that make up human DNA that it may be feasible for them to manipulate chromosomes,

But the sexual relationships that occur between ETs and humans in so many documented abduction cases — which ufologists the world over have ruled out are for recreational or erotic purposes, but rather for reasons of controlled reproduction — are not the only way our visitors have to collect our genetic material. Men taken aboard alien ships are subjected, in an expressive majority of cases, to the extraction of semen through instruments, and sometimes this practice is followed by sexual intercourse on board, either with ETs or with other abductees present there. Just as women taken inside UFOs also have their eggs extracted with equipment, sometimes painfully.

In the face of such evidence, attributing a limitation to the activities of extraterrestrials, comparing them to human parameters, is a phenomenal mistake, as we may be facing creatures that have a scientific evolution that we cannot even imagine, let alone evaluate. But it is also important to consider that genetic compatibility between our species may be possible. Alpha or gray aliens even told their earthly interlocutors that “we are made of the same substance”, as happened in the case of abductee Betty Andreasson Luca, which began decades ago. She assures her that her abductors have informed her that we share similar genetic structures with them.

In fact, we may have even deeper connections with our extraterrestrial visitors than we might think. It is not new that many researchers argue that terrestrial man had contact with other cosmic species in the biblical past, with humanity having interpreted such situations as divine manifestations, and in such a way they are defended until today by the Catholic Church. There are also not a few scholars who argue that the very emergence of man on Earth is due to a program of colonization of worlds operated by alien civilizations. Are we children of an ancestor in common with our visitors, or their own?