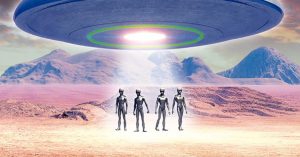 The Chulucanas region, in Peru, is an area of ​​high and constant UFO incidence, also confirmed by the country’s military.
Credits: LUCA OLEASTRI
Peru has always been considered an important pole of sightings of anomalous aerial phenomena. However, until recently there was no bibliography or accurate field investigations of UFO occurrences in that country. In this way, extraordinary cases, which could greatly contribute to the scientific understanding of such manifestations, unfortunately remained ignored by international public opinion and, mainly, by the World Ufological Community. However, over the last two decades this picture has begun to change. One of the episodes that led to this transformation took place around 7:00 pm on October 13, 2001, when hundreds of people were on the streets of Chulucanas, a city in northern Peru, to watch or participate in a traditional religious celebration, the Procession of the Lord of Ayabaca.Suddenly, eight balls of light in colors ranging from red to orange were positioned in the sky of the peaceful city, almost on the border with Ecuador. In fact, since 5:00 pm that same day, although without attracting much attention, a smaller group of people had already watched those strange spheres form a series of geometric figures in the sky and then maintain a strange and silent presence, until they disappeared into the sky. It is estimated that hundreds of people witnessed the events—perhaps thousands.Fortunately, the events were captured on video by photographer Ivan Iza, who a few days later, on October 25, also managed to capture, in the neighboring Morropón Valley, a teardrop-shaped object that appeared in the sky amid flashing lights. The artifact was approximately 25 m in diameter and hovered over the fields near the city in silence for nearly half an hour. One of the most interesting scenes in this video is the apparent landing of two such lights between the trees in the place.

The sightings in Chulucanas had great repercussion in the country and a good part of the investigations was carried out by the then Oficina de Investigación de Fenómenos Anómalos Aeroespaciales (OIFAA), an entity of the Peruvian Air Force (FAP) founded in December 2001. One of the first official ufological research on the continent and among the few existing around the world, the Office [Oficina in Spanish] received government approval for its activities due to the importance that the phenomenon assumed in that country of ancestral cultures. To lead the field investigations of what would come to be known as the Chulucanas Incident, the entity highlighted this author, for his activities as a civil ufologist and his specialization in defense and aerospace development at the Escola Superior de Guerra Peruana.

The impact of the Chulucanas Incident on Peruvian public opinion had several consequences. One of them took place in February 2003, when Colonel José Raffo Moloche, director of aerospace affairs at the FAP, declared to the press that the facts of the Peruvian state of Piura were being investigated by the Office, becoming the first UFO incidents to be dealt with in officially by a government of that country — a rare case in the world. Investigations into the facts in Chulucanas reached their peak on the morning of August 6, 2004, when a news team from the American channel Univision arrived in the region to make a documentary on the subject — which, for a long 55 minutes, had the lucky to film a luminous object of unknown origin, whose unusual maneuvers seemed to form traces of an electrocardiogram in the sky.

Post Views: 100,666
Tags: The amazing Chulucanas Incident is confirmed by the Peruvian Government