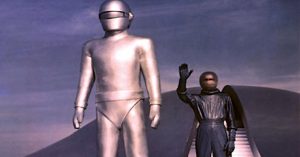 The moment of landing of the giant robot Gort [Ahead] and the alien Klaatu, just before he was accidentally shot

In 1951, a year before George Adamski emerged as the first contactee of the Modern Era of Flying Saucers and two years before Dino Kraspedon [Aladdin Felix’s Pseudonym] had his first encounter with the space commander, a flying saucer landed right in the center of Washington, at exactly 3:47 pm, and was immediately surrounded by a crowd of onlookers and the United States Army. After a few hours of idle suspense, an alien emissary with an identical human physique appeared from an opening in the completely smooth hull of the ship, from which no cracks could be seen, who announced that he had come “in peace and with good will”.When he unexpectedly opens a small device in his hand, he is shot and wounded by a rash, nervous soldier. A tall robot, apparently made of the same metal as the ship, emerges from the disk and disintegrates the Army’s weapons. The alien orders the robot, Gort, to stop and explains that the device, now broken, was a gift to the President of the United States that would have allowed him to “study life on other planets”.The alien, Klaatu, is taken to the Walter Reed Military Hospital. After the surgery, he uses an ointment to quickly heal his wound. Meanwhile, the Army tries in every way, but fails, to enter the saucer. Gort stands outside, like a statue, silent, impassive, and still. Klaatu tells US Secretary of State John Harley that he has a message that must be conveyed to all world leaders simultaneously. Harley tells him that in the prevailing political climate of tension and mutual distrust between nations, such a conference would be impossible. Klaatu suggests that he himself could dissuade humans from their “irrational suspicions and attitudes”. The secretary forwards his proposal to the government, which rejects it, and Klaatu remains confined, under surveillance.

Klaatu escapes from the hospital and, posing as an Earthling, hides in a boarding house, where he registers under the name Carpenter. There he meets the young widow Helen Benson, an employee of the Department of Commerce, and her son Bobby. When Helen and her boyfriend Tom Stevens leave, Klaatu offers to babysit Bobby and Bobby takes him on a tour of town, including a visit to his father’s grave at Arlington National Cemetery — Klaatu discovers that most of those there buried are soldiers killed in wars. They also visit the Lincoln Memorial, and there Klaatu revives his hopes by reading Lincoln’s ideals.