“It’s actually the first time we’ve ever encountered it and that’s why we don’t know much about it because we’ve never seen anything like this before,” said Mary Beth Fitts, Assistant State Archaeologist with the Office of State Archaeology 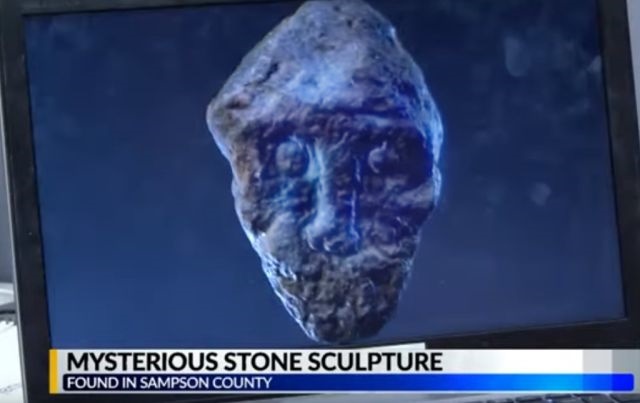 A stone sculpture was found by a man named Tom Giddens who lives in Newton Grove and it wasn’t until a worker out plowing his field hit it that he discovered the mysterious artifact reports cbs17.

“The plow hit the stone and the person picked it up and put it to the edge of the field and then Mr. Giddens as he was walking by flipped the stone over and saw there was a face in the stone,” Fitts said.

Fitts created a 3D model of the stone sculpture and put it out on social media, in the hopes that someone somewhere would know something about the artifact’s origins.

“It really is mysterious. We don’t know what time period it’s from. It could be a piece of folk art or it could’ve been made a long time ago. It’s made of sandstone and that’s a pretty soft stone so you don’t need special tools to carve sandstone so that means if really could’ve been carved anytime in history.”