NASA’s InSight lander detected seismic waves from a meteoroid and was able to capture the sound of the space rock striking the surface of Mars for the first time. The meteoroid – the term used for incoming space rocks before they hit the ground – entered Mars’ atmosphere on Sept. 5, 2021, exploding into at least three shards that each left craters behind. Mars’ atmosphere is just 1% as dense as Earth’s, allowing far more meteoroids to pass through and impact the Red Planet’s surface. 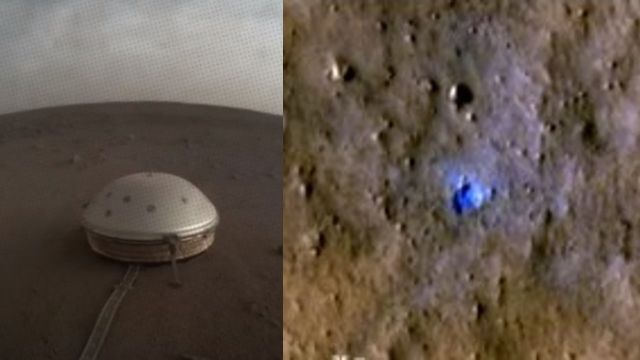 This event marks the first time seismic and acoustic waves from an impact were detected on the Red Planet. Why does this meteoroid impact sound like a “bloop” in the video? It has to do with a peculiar atmospheric effect that’s also observed in deserts on Earth.
After sunset, the atmosphere retains some heat accumulated during the day. Sound waves travel through this heated atmosphere at different speeds, depending on their frequency. As a result, lower-pitched sounds arrive before high-pitched sounds. An observer close to the impact would hear a “bang,” while someone many miles away would hear the bass sounds first, creating a “bloop.”

NASA’s Mars Reconnaissance Orbiter flew over the estimated impact site to confirm the location. The orbiter used its black-and-white Context Camera to reveal three darkened spots on the surface.

After locating these spots, the orbiter’s team used the High-Resolution Imaging Science Experiment camera, or HiRISE, to get a color close-up of the craters. Because HiRISE sees wavelengths the human eye can’t detect, scientists change the camera’s filters to enhance the color of the image. The areas that appear blue around the craters are where dust has been removed or disturbed by the blast of the impact. Martian dust is bright and red, so removing it makes the surface appear relatively dark and blue.