Alexander Atamanov uploaded a video showing some sort of robot-dog with a machine gun on top of its body. 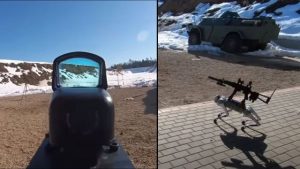 The robot moves around and shoots a series of bullets at various targets.

And although its design looks like it comes straight out of a sci-fi thriller, the patrol robot dog seems to become reality.

The question is whether the Boston Dynamics robot dog will be deployed in war zones or whether to restrain the masses on the street.