After the Rendlesham Forest UFO incident, Ilkley Moor became the most famous alien spot in the United Kingdom. A retired British police officer named Philip Spencer never thought that one fine morning he would encounter an alien entity and capture it in his camera.

The incident occurred on December 1, 1987. In the early morning, Spencer left his home in Ilkley, saying goodbye to his wife and children to meet his father-in-law who lived on the other side of Moor.

Ilkley Moor is an upland moorland & conservation area in Yorkshire, England with a notable bird population, walking trails & tranquil views. It has the carved boulders, dating back to the Bronze age. Besides, it is known for the legends of strange creatures that roam in the darkness and strange lights that were seen coming through the mist. The place is situated just 21 miles away from the RAF Menwith hill military base which accounts for several UFO sightings. 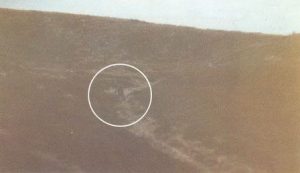 It was dark when Spencer started his journey. He had a compass to navigate in dense fog and a camera, hoping to capture the beautiful sites of Moor on his way. When he was passing through the area called White wells, an 18th-century town, he was distracted by something unusual. He saw a small-sized creature with long arms, similar in shape to a “Sock Monkey.”

Surprisingly, the creature made a strange move with its right arm, like it was waving at Spencer, and that’s the moment he captured in his camera before the entity disappeared behind the slopes.

According to Spencer, the creature had big black eyes, pointed ears, and strangely long arms. He described its feet as a hoof split into two toes.

What happened next is really shocking. Spencer said that he immediately followed the creature but unfortunately lost it. Subsequently, he claimed to have seen a dome-shaped spacecraft that rose from the moor and disappeared into the sky. Spencer seemed to be confused as things were not adding up for him. He came to his father-in-law’s village and was shocked to see the time in the church clock. It was already 10 a.m., and he could not understand where he had missed 2 hours. He thought that he might have hallucinated everything. But his doubts were cleared after he processed the photographs he had taken. He got assured after seeing the creature in the photograph. It was blurred but still, it existed.

The negative was later examined by various UFO experts, and they did not find any sign of tamper. It means that Spencer took a real shot of the alien creature.

Wharfedale UFO expert Nigel Mortimer re-examined Spencer’s photo in 1998. He said: “I have been trying to do this analysis for years. We are also trying to get other people involved and will look at the evidence properly. It isn’t just this photo – there have been reports of other phenomena in that area for years. I was talking to some Americans last week and they told me that they regard this Ilkley case as second only to the Roswell case in the US as evidence of aliens.” 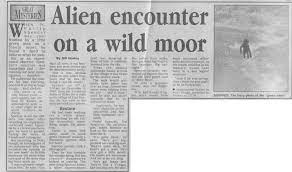 The strangeness did not end there. After the incident, Spencer started having strange dreams in which he saw a starry sky. Then he wondered what could have happened to him during the missing time. He was advised by the UFO investigators to go under hypnosis. He recalled the creature approached him before he took a photo. He said (under hypnosis):

“I’m walking along the moor. Oh! It’s quite windy. There’s a lot of clouds. Walking up to­wards the trees, I see this little something, can tell, but he’s green. It’s moving towards me. Oh! I can’t move, I m stuck! He’s still coming towards me. And I still can’t move… I’m stuck, and everything’s gone fuzzy. I’m… I’m floating along in the air… I want to get down! And these green things walking ahead of me, and I don’t like it.

I still can’t move. I’m going around the corner and this green thing in front of me. Oh, God, I want to get down. There’s a… there’s a big silver saucer thing, and there’s a door in it, and I don’t want to go in there! Everything’s gone black now…”

He remembered he had been examined by the creaturs inside the ship, and they showed him a movie on a disaster that would occur if people did not stop population growth and pollution. After that, he was returned back to the moor with no memory of his abduction.

Philip Spencer did not earn fame and money from his story, and he is one of few abductees who showed evidence to prove his encounter.