On April 20, 2016 the ISS live cam recorded an unknown object that certainly wasn’t a meteor or space junk. 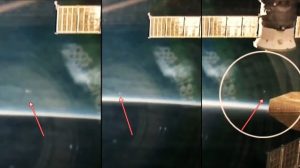 The object comes into view of the ISS camera while flying at high speed, then it slows down its speed until it totally stops. After a while the object moves on and changes it s direction twice before it disappears into space.

Since the object makes several maneuvers, it also cannot be a satellite. this is clearly a secret man-made or extraterrestrial craft which is under intelligent control.

Asking NASA or the ISS crew what this object could have been is a waste of time, as they will never admit the origin of this craft.