An incredibly realistic footage of a ‘UFO’ Goes Viral. A bewildered TikTok user believes she spotted a UFO in plain sight. 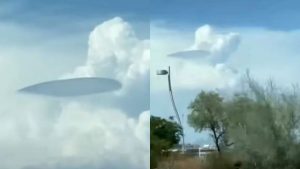 Nesha Higgins (@neshahiggins) shared the viral footage of the ‘unidentified object’ on the platform, leaving over 3 million viewers as baffled as her.

The video shows Nesha driving along a highway in Arizona when she spots a peculiar-looking object near the clouds in the shape of a UFO spaceship.

“What the f**k is that? That is the craziest thing I’ve ever seen in my life, bro,” she said, as her friend responded: “That’s so cool.”

Thousands of viewers headed to the comments to debate what it could, or could not, be. Creative theories were rife, with many comparing its appearance to a portal.

“I would’ve stood under it bc I’m done with this planet,” one joked, while another added: “They really pulled up this time.”

Some realists shut it down, claiming that if it were a UFO, the plane wouldn’t have flown near it. The airport tower would have had the plane standby if something is in its airspace,” one said.

While we admire the creativity in the comments, it does appear to be a lenticular cloud which often looks like a flying saucer .

The Met Office defines lenticular cloud as “lens-shaped orographic wave clouds form when the air is stable and winds blow across hills and mountains from the same or similar direction at different heights through the troposphere.”