On July 27, 2022, the James Webb Space Telescope released an image of Jupiter’s Great Red Spot using one of its infrared cameras. The image above contains a cylindrical-shaped object floating high above Jupiter’s atmosphere that appears to be more than a thousand miles long. The image corroborates claims of giant spacecraft recently arriving in our solar system and parking in the vicinity of Jupiter.
These giant motherships are not only arriving and parking near Jupiter, they are also seen near other planets like Saturn and even the Sun as well as other places in space.

Below images show some of these huge motherships captured near the Sun and in Space which are comparable in size to the UFO floating high above Jupiter’s atmosphere. 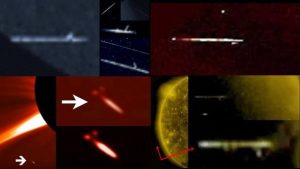 There is clear evidence of the existence of interstellar alien spacecraft, but the US government and NASA are still silence about these giant motherships traveling through our solar system.