The new intel on the UFOs by the US government is out. They identified 144 cases where the intelligence finds it hard to determine the nature of the objects. However, the reports mentioned no extraterrestrial link to these objects. Whether or not, we still have a lot of disclosure ahead with shocking details. The unidentified objects seen in the sky are of various shapes: triangular, saucer, dome, but the most peculiar one is cylindrical or cigar-shaped.

The cigar-shaped craft is important because it has special space in the government files. In March 1971, the crew of the USS Trepang SSN 674 submarine took stunning UFO photographs including triangular and cigar-shaped. 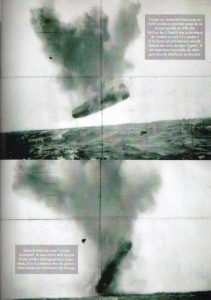 The following images were leaked according to the Black Vault, and the US navy archives say that Rear Admiral Dean Reynolds Sackett Jr from Beatrice, Nebraska had been the commanding officer of the USS Trepang submarine from August 1970 to December 1973.

These images were first published by the French paranormal magazine called the “Top Secret” and were investigated by a paranormal investigator and author named Alex Mistretta. According to him, the UFO images were top secret and somehow got leaked.

Another best shot of a cigar-shaped UFO was taken by Italian Air force Senior Warrant-Officer Giancarlo Cecconi on June 18, 1979. At around 11:30 am, he was returning to Treviso Istrana Air Base, Italy after completing a photo reconnaissance mission, when he received a signal from the control tower of the St. Angelo Military Airfield about the unidentified flying object that was flying low. 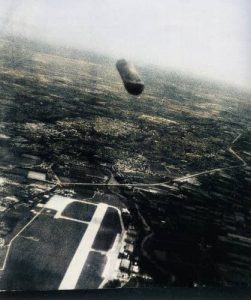 The intrude was detected by The Istrana Radar Center. Cecconi was flying Fiat G.91 bomber with three cameras, two on the cockpits’ sides and the other mounted at the top. He received information from the Istrana Filed about the UFO that was behaving strangely and flying right above the Italian town of Quinto in Treviso Province.

Cecconi, with empty cameras’ reel, followed the object, passed it at a distance of 80 meters and took the photos. Further, he approached the object closer and observed its details perfectly. Surprisingly, the pilot took about 80 photos of the object, describing it as 8 meters tall and 3 meters wide. Artistic impression of the UFO photographed by Italian pilot Giancarlo Cecconi. Its upper part appeared to be slightly flattered with approximately in the center, a small white transparent dome.

The airport ground staff watched the whole incident through binoculars and warned Cecconi about a strange azure-bluish trail, emitted by the object. He tied to approach to object one last time but it vanished from the sight as though dematerialized.

The next great account of the cylindrical object was observed by a NASA astronaut during a Gemini 4 mission.

In 1965, astronauts James McDivitt and Ed White made history by circling Earth 66 times in four days. It was NASA’s second manned mission designed to show that it was possible for humans to remain in space for extended lengths of time. Besides, during the mission, the astronaut Ed White performed the first spacewalk for 20 minutes, making him the first American to ever do it. 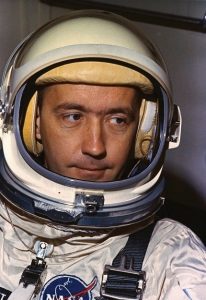 During the Gemini 4 mission, astronauts carried out numerous space experiments, allowing NASA to prepare for the lunar landing in 1969. But the mission became famous rather for a different reason.

Many UFO experts were stunned after seeing the UFO photograph taken by astronaut James McDivitt in low Earth’s orbit. They called it one of the “best UFO photos ever made.” Obviously, NASA remained skeptical about the image. Even the space agency insisted that there was nothing peculiar in the image. It could be a terrestrial object, either the Americans or Soviets. At the same time, other skeptics suggested that it might have been McDivitt’s booster rocket. 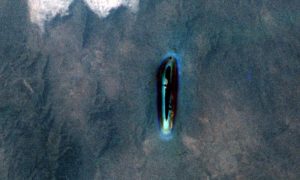 Astronaut McDivitt had never acknowledged the object in the photograph to be extraterrestrial, which is not surprising. His words on the subject are (as reported in FATE magazine, June 1974):

“I was flying with Ed White. He was sleeping at the time, so I don’t have anybody to verify my story. We were drifting in space with the control engines shut down, and all the instrumentation off (when) suddenly (an object) appeared in the window. It had a very definite shape — a cylindrical object — it was white — it had a long arm that stuck out on the side. I don’t know whether it was a very small object up close or a very large object a long ways away.”

These three accounts of cylindrical or cigar-shaped UFOs that occurred in the 1960s and 1970s should have baffled researchers on their origin. What if NASA, the US Navy, and the Italian Air Force encountered the same object?

One may wonder why someone would build an advanced flying object in a cylindrical shape as it is not the best aerodynamic shape. We have cylindrical-shaped rockets but to satisfy aerodynamic needs, they have pointy noses. But these objects are purely cylindrical in nature, without any pointy edges.