It’s difficult to say which UFO sighting is more credible. The world has witnessed incredible UFO footage and photographs in recent years. In 2007, one of the most under-reported yet significant sightings occurred over the British Channel Island of Alderney.

On April 23, 2007, two airline pilots witnessed a mystery mile-wide object hovering off the coast of Alderney. Captain Ray Bowyer (then 50) of British airline Aurigny was flying a robust turboprop airplane with 5 people on board. It was a short journey of 80 miles (130 kilometers) from Southampton, England to Alderney.

Captain Bowyer saw a “bright-yellow-light with a green area” 10 miles west of Alderney during a 40-minute flight at around 3 p.m. When he saw the light, he was only 30 miles away from the island and sailing at 4000 feet. He initially assumed it was a reflection of sunshine from a Guernsey glasshouse. 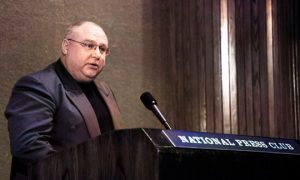 On November 11, 2007, Ray Bowyer spoke to the National Press Club in Washington, D.C. about his sighting. (Photo courtesy of James Fox)

Captain Bowyer thought it odd that the plane remained immobile as it approached the brilliant light. He took out his binoculars for a closer look and was taken aback when he saw a massive, wide object. A cigar-shaped object with pointed ends was radiating bright yellow light, according to him. A dark grey band ran roughly one-third of the way down the right side, covering it.

“I assumed it was around ten miles distant, but it turned out to be about 40 miles away. “At first, I mistook it for a Boeing 737,” he explained. Captain Bowyer stated that the UFO was below the plane at a height of 2000 feet. He lowered the plane’s nose slightly to give the passengers a better view of the object.

Captain Bowyer was already in a dangerous situation. His mind split into two directions: closer to the object or away from it. He found the thing to be palpable, therefore he opted to pass because he needed to protect the passengers. “I’m not implying that it was something out of this world. All I’m saying is that in all my years of flying, I’ve never seen anything like it,” he continued. 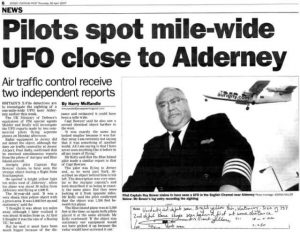 Meanwhile, he inquired about aviation traffic in the vicinity of the Jersey Air Traffic Control Centre. According to Paul Kelly, the on-duty air traffic controller, there were no other planes flying that route. However, something was identified around seven miles west of Alderney by radar. As a result of this information, Captain Bowyer was able to estimate the size of the object, which was estimated to be roughly a mile long.

The oddness didn’t stop there. Captain Bowyer encountered a second UFO after a few minutes, which was identical to the first but appeared to be smaller and further away. Both objects were discovered at a height of 2,000 feet. Surprisingly, while on route to Jersey, another Blue Islands airline pilot verified a similar sighting. The second pilot noticed the item while flying south of Sark Island at a height of 3,500 feet, according to Kelly.

The sighting lasted 15 minutes, according to Captain Bowyer, and he intended to explore it further, but he landed at Alderney to ensure the safety of his passengers. 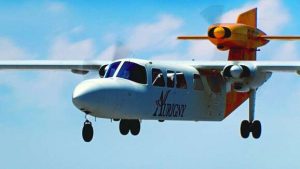 On April 23, 2007, Captain Ray Bowyer flew a similar aircraft, as depicted in this illustration.

The bizarre UFO sighting was also corroborated by two visitors who stayed in a hotel at Sark during that time, according to BBC radio. They went out for an afternoon walk when they noticed weird things in the sky heading towards Alderney.

The item appeared on the radar for 55 minutes, according to reports from Captain Bowyer, the Blue Islands pilot, and Jersey Airport Radar Control, and a gradual movement was also detected. A similar UFO activity had been observed above the Alderney coast just a few weeks before the Alderney UFO event. However, the possibility of a UFO was ruled out by referring to it as an atmospheric occurrence.

The Alderney event caused quite a stir in the media. Guernsey Press initially reported this story on April 28. Meanwhile, the British Ministry of Defence (MoD) started looking into the matter. 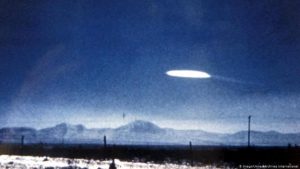 On Oct. 16, 1957, Ray Bowyer witnessed a similar UFO near Holloman Air Development Center in New Mexico, which was documented by a US government employee.

Captain Bowyer disclosed on prime time television that he had been collaborating with Sheffield Hallam University’s Dr. David Clarke to discover more about his sighting. Miss Ella Louise Fortune, a Welfare Nurse at Mescalero Apache Indian Reservation at Holloman Air Development Center in New Mexico, photographed an object that looked like a UFO on October 16, 1957, according to Bowyer.

Several theories have been proposed to refute the UFO theory, including the sun dog effect and most likely military aircraft. Troy Queripel, a Flybe airline pilot, speculated that it could have been military secret testing of new equipment. Captain Bowyer, on the other hand, refuted all of these claims. He assured that the objects were not created by aircraft or natural phenomena. In his 20 years of flying, he had never seen anything like that.

The Ministry of Defense ended its investigation into the Channels sighting after a month because there was no threat to the UK’s national defense. They came to the conclusion that the incident occurred over French airspace. The case has yet to be solved.

Post Views: 100,220
Tags: The Most Credible UFO Case From UK: It Happened In British Channel