Do you still believe we’re the only people on the planet? Most religious individuals who oppose this issue have never had to deal with it before.

Recently, a religious leader talked freely about life in the cosmos and the possibility of extraterrestrial life forms similar to humans. This time, the Dalai Lama addressed the topic during a conference titled “Universal Responsibility and the Internal Environment” at the University of Portland (Oregon).

Simultaneously, Stephen Cook, a journalist, releases a piece titled “The Dalai Lama reveals that visitors from other galaxies are the same as us.” The Dalai Lama set an example for the audience. If we came across creatures from other planets, how would we see them?

Diversity would be terrifying to us. Because of their uniqueness, we would feel terrified and shunned. On the other side, the Dalai Lama believes that we should welcome them and treat them as equals. 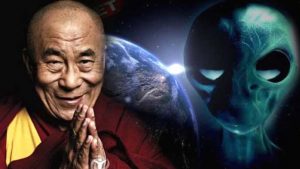 This is not the first time the highest representative of Buddhism has talked about these concerns; in fact, in 2000, professor John Mack had the chance to speak with him about it.