According to experts, iron has played a crucial role in the development of life on Earth.

Professor of iron biology Hal Drakesmith and associate professor of planetary materials Jon Wade of Oxford University have hypothesized that the presence of iron on distant planets might indicate the existence of complex life.

Iron is abundant in our red blood. Iron is required for growth and immunity. It’s even added to foods like cereal to ensure that enough of this mineral is consumed to avoid an iron deficiency.

On a much smaller scale, the iron scarcity may have benefited evolution over billions of years throughout Earth’s history. According to our new research, which was published in the Proceedings of the National Academy of Sciences (PNAS), increasing and falling iron levels on our planet may have enabled complex organisms to arise from simpler ancestors.

Mercury, Venus, Earth, and Mars, the terrestrial planets of our solar system, have variable quantities of iron in their rocky mantles, the layer under the outermost planetary crust.

Mercury has the least iron in its mantle, whereas Mars has the most. Variations in distance from the Sun generate this oscillation. It’s also due to the various circumstances under which the planets’ metallic, iron-rich cores developed.

The amount of iron in the mantle regulates a variety of planetary processes, including the retention of surface water. Water is necessary for life as we know it. Astronomical surveys of other solar systems may enable for estimates of a planet’s mantle iron, which might aid in the search for planets that could host life.

Iron is required for the biochemistry that allows life to exist, as well as contributing to the habitability of planets. Iron has a number of unusual properties, including the ability to form chemical bonds in a variety of orientations and the ease with which one electron may be obtained or lost.

As a consequence, iron facilitates catalysis, a mechanism that speeds up chemical reactions, and thereby mediates various biochemical processes in cells. Iron is necessary for important metabolic processes including DNA synthesis and cellular energy generation.

In our investigation, we determined the amount of iron in the Earth’s seas throughout billions of years. The influence of enormous quantities of iron falling from the oceans on evolution was then investigated.

The history of iron.

The initial formative processes of geochemistry transformed into biochemistry, and hence life, more than 4 billion years ago. And everyone believes that iron played a key role in the process.

Early Earth’s conditions were very different from those that exist now. Iron was readily soluble in water as “ferrous iron” (Fe2+) since there was almost little oxygen in the environment. The presence of nutritious iron in the early seas of the Earth assisted the emergence of life. However, this “ferrous paradise” was not to endure.

The arrival of oxygen in the Earth’s atmosphere was triggered by the Great Oxygenation Event. It all started some 2.43 billion years ago. This changed the Earth’s surface, causing a massive loss of soluble iron from the planet’s upper ocean and surface waters.

Between 800 and 500 million years ago, the Neoproterozoic, a more recent “oxygenation event,” occurred. This resulted in even higher oxygen concentrations. Oxygen combined with iron and gigatonnes of oxidized, insoluble “ferric iron” (Fe3+) plunged out of ocean waters as a consequence of these two events, leaving most lifeforms inaccessible. 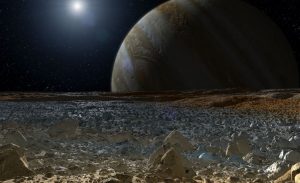 The inescapable demand for iron has increased – and continues to expand – throughout life. The absence of soluble iron has far-reaching consequences for the development of life on Earth. It would have been evident that behavior that maximized iron intake and usage would have had a selection benefit. We can demonstrate that bacterial kinds that can successfully scavenge iron from their hosts beat less competent competitors over a few generations in today’s genetic study on infections.

In this struggle for iron, the “siderophore,” a small molecule produced by many bacteria that gathers oxidized iron (Fe3+), was a crucial weapon. Siderophores became significantly more useful after oxygenation, enabling organisms to consume iron from minerals containing oxidized iron. On the other hand, siderophores helped in the theft of iron from other organisms, notably bacteria.

This change in focus from obtaining iron from the environment to taking it from other living things created a new competitive interaction between viruses and their victims.

Both sides’ methods for assaulting and safeguarding their iron resources evolved throughout time as a consequence of this process. Over millions of years, this intense competitive drive resulted in more complex behavior, culminating in highly developed species.

Other methods, including stealing, may help to reduce dependency on a limited resource. One example is symbiotic, cooperative relationships that share resources. Mitochondria are energy-producing, iron-rich devices that were formerly bacteria but now dwell in human cells.

Complex organisms’ capacity to cluster together helps them to make better use of limited resources than single-celled species like bacteria. Humans, for example, recycle 25 times more iron than we eat each day.

Infection, symbiosis, and multicellularity offered various but elegant strategies for lifeforms to overcome iron restrictions from an iron-biased viewpoint. Iron deficiency may have influenced development, including contemporary life.

Earth emphasizes the importance of irony. The combination of an early Earth with physiologically available iron and subsequent elimination of iron by surface oxidation resulted in unique environmental pressures that assisted in the evolution of complex life from simpler precursors.

In other universes, these same conditions and changes over such lengthy periods of time would be exceptional. As a consequence, our cosmic neighborhood’s chances of meeting more advanced lifeforms are expected to be slim. Looking at the amount of iron on other planets, on the other hand, might aid in the discovery of such unusual worlds.

Post Views: 100,252
Tags: Could Iron Be The Secret To Finding Extraterrestrial Life On Other Worlds?