The colonization of space is inextricably linked to space exploration. Excessive exploitation of the Earth’s natural resources, on the other side, will render our world uninhabitable sooner or later.

Billionaire Jeff Bezos thinks that in the future, humanity should migrate to space and regard the Earth as a natural reserve. 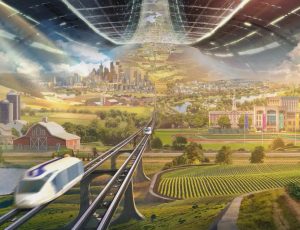 Jeff Bezos controls Blue Origin, a space corporation that competes with SpaceX and VirginGalactic. He claimed that mankind should leave Earth and reside in space stations to protect our planet from being destroyed during the annual conference at the Washington National Cathedral.

People should live on space stations with artificial gravity in the future, according to the billionaire, since society is always increasing and using more and more resources.

Bezos claims that space colonies can house up to a trillion people and that if the Earth survives, mankind should harvest resources and generate energy outside of the Blue Planet.

Of course, building space colonies necessitates resources, and our civilization isn’t yet advanced enough to mine them from asteroids or other planets.

As a result, putting Jeff Bezos’ concept into effect will need the exploitation of additional earthly resources. And, if space colonies were to be built using resources sourced from beyond Earth, the billionaire’s proposal would only be achieved in the far future.

Post Views: 100,261
Tags: And We Will All Live In Space Stations, Jeff Bezos Claim, Our Planet Will Become A Nature Reserve