A rectangle that looks to be a direct response to a Nasa message blasted into orbit in 1974 is one of the most astounding crop patterns.

The message was a radio broadcast that showed the location of our planet in our solar system as well as the inhabitants of Earth with the hopes of being received and decoded by an alien intelligence.

Twenty-seven years later, in 2001, the identical pattern returned in London, right adjacent to the same antenna that had transmitted the first message! There’s also a picture of the sender that looks to be a self-portrait.

This message follows the same pattern as Nasa’s signal from 1974, and it includes a picture of the sender as well as a solar system other than our own.

They seem to communicate via non-human DNA signals and a microwave antenna. We use our own radio antenna instead of the one shown in Nasa’s letter. 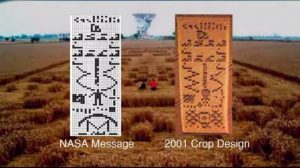 The antenna symbol first appeared in the same spot a year ago, right next to a working radio wave antenna, identical to the one Nasa used to transmit the original signal.

Nasa maintains that it has had no contact with extraterrestrials. Regardless, these gorgeous constructions appear year after year all throughout the world.