Parallel worlds, often known as the multiverse, exist alongside our own in literature and films like Spiderman: Into the Spider-Verse, with everything from minor changes in events to whole distinct laws of physics. It’s an intriguing and exciting concept.

Physicists have given the topic of whether parallel worlds exist a lot of attention, and they’ve come up with a number of hypotheses.

One popular idea is based on something that physicists are already aware of. The cosmos continues to grow. This indicates distant galaxies are moving away from us. This is referred to as cosmic inflation.

Furthermore, the cosmos expands quicker as you travel farther away from Earth. At some point, the cosmos will expand too quickly for light from distant galaxies to ever reach us. This implies that there is a point in the cosmos beyond which we cannot perceive.

That isn’t to say there isn’t something there. There are still more galaxies beyond this horizon, but we’ll never see them. The areas of the cosmos beyond this boundary are described by some physicists as a distinct, parallel world.

This hypothesis is popular because it does not need any new physics or modifications to our existing knowledge of the cosmos.

Another notion concerning parallel worlds is that cosmic inflation occurs several times. According to the theory, inflation occurred in numerous locations shortly after the Big Bang.

Separate universe bubbles inflated as a result, and some forms of stuff ended up in one bubble rather than the other in certain situations. This implies that the physical laws that govern how things operate in certain bubbles may vary. Each bubble is still boundless in size, but it exists independently of our cosmos. This idea intrigues physicists because it might explain why we haven’t discovered some things that we would expect to see in our world based on scientific evidence.

Magnetic monopoles, for example, are one-sided magnetic fields with just a negative or positive side. They could reside in a different universe bubble.

The final hypothesis requires consideration of quantum mechanics, a branch of physics. The chance of microscopic particles accomplishing anything is the subject of quantum mechanics. When a small particle is shot toward a wall, it may bounce off or pass straight through it.

Quantum mechanics can tell us which outcome is most probable. There’s nothing in the math that says just one of the occurrences has to happen. Both of these things might happen at the same time.

But only one of these things would happen. So, if you observed the particle bounce off the wall, it may have also tunneled through it — only in a different reality than ours. 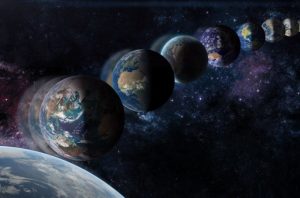 Except for one little exception, everything in this parallel world would be identical to ours. Instead of bouncing off the wall in that reality, the particle passed through it. According to the many-worlds hypothesis, this happens every time a quantum mechanical process occurs, resulting in the creation of a new parallel reality.

Is there a second Earth?

There is plenty of space for another Earth in the many-worlds idea. Each quantum process on Earth would generate a parallel world with a different Earth.

The other hypotheses — of universe bubbles and endless vastness – are more complicated. If there are infinite universe bubbles and limitless space, there is a probability that the exact identical events occurred in another bubble or somewhere in the vastness of space to form another Earth.

However, when you do the math, it quickly becomes improbable. The probability of 1,000 particles interacting in precisely the same manner again is 1 in 102477.

The number 102477 is made up of a ten and 2477 zeros, which is a huge number. Because the cosmos contains considerably more particles than 1,000, the odds of finding another Earth are slim.

Unfortunately, we have no way of knowing whether these other worlds exist. We don’t, at least not right now. Physicists are attempting to test these hypotheses, but the task is very tough. For the time being, they are just hypotheses. But who knows, maybe scientists in another reality have found it out already.

Post Views: 100,304
Tags: How Likely Is It That Parallel Universes Actually Exist And Also Other Earths?