The KGB purportedly undertook an excursion to Egypt in the early 1960s, where they allegedly uncovered the bones of an ancient alien within an Egyptian tomb. The mission was organized by Soviet intelligence as part of Project ISIS, with the goal of uncovering the mythology of the god “Tomb of the Visitor.” In 1998, the American network Sci-Fi aired a documentary named “The Secret KGB Abduction Files” that detailed the mystery.

Viktor Ivanovich, a Russian neurologist and astrophysicist who was recruited by Soviet intelligence as a scientific advisor for the development of advanced propulsion systems, revealed the covert initiative. Ivanovich told Sci-Fi that he had obtained access to KGB secret papers regarding Project ISIS, which aimed to uncover knowledge and evidence of alien technology in Egypt. The trip featured a team of Soviet Academy of Sciences Egyptologists, Hermitage Museum Egyptologist Herman Alekseen, military experts in chemical and radiation, some astronomers, and Sami Sharaf, Secretary to Gamal Abdel Nasser, Egypt’s second president.

When the operation was planned, there were around 20,000 Soviet military units in Egypt. The hunt was sparked by the two Arab tribes’ unexpected discovery of a strange tomb in one of Giza’s pyramids. The tribes were ill shortly after entering the chamber and were taken to the hospital. The “Visitor God” had been woken, according to Egyptian intelligence. The KGB was alerted by this revelation, and Project ISIS has since become a primary priority. The study team looked into the tomb that the Arab tribes unearthed. According to Ivanovich, the Soviets discovered a treasure trove of antiquities in the tomb. 15 boxes of items, 1 partially mummified body, one stone sarcophagus, and 8 samples of hieroglyphics were discovered. While studying the area, they felt a strange repellent force coming out of the walls, according to a report produced by one of the experts.

Furthermore, one of the cryptographers who decoded the Egyptian markings carved on the walls wrote a prophecy regarding the winged deity’s return, according to a report. The most remarkable find was a mummy discovered in a sarcophagus that stood 2 meters tall, significantly taller than the usual ancient Egyptian height. 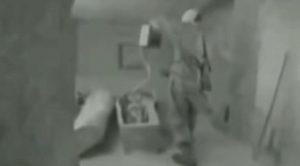 The KGB is inspecting the radiation level within the chamber.

Boris Timoyev, a molecular biologist, conducted 14 different experiments using carbon dating to determine that the mummified remains was between 12,000 and 13,000 years old. According to Egyptian mythology, a family of gods descended from the stars, bringing them knowledge and wisdom. Except for God “Osiris,” they all returned to the stars after accomplishing their duties on Earth. He was the Ancient Egyptian god of the dead and the god of endless life, as well as the deceased’s ruler, defender, and judge. His cult began at Abydos, Egypt, where his tomb is said to be located.

“Osiris was slain or drowned by Seth, who tore the corpse into 14 pieces and threw them around Egypt,” according to Britannica. Isis and her sister Nephthys eventually discovered and buried all of the pieces, except the phallus, resurrecting Osiris and relegating him to the underworld as ruler and judge. Horus, Osiris’ son, defeated Seth and avenged his father, becoming the new king of Egypt.”

God Osiris did really arrive on a flying boat from the stars. A formulation like this would be akin to modern UFO encounters that occur on a regular basis all over the planet. Various alien theories piqued the Kremlin’s curiosity at the time. A team of scholars that discovered the mummy was sure that it belonged to Osiris based on ancient stories.

During the Cold War, the Soviets were hunting for superior technology, and the legends about the pyramids’ origins piqued their interest. Furthermore, Soviet experts began to question the pyramids’ true function and whether they were built for a specific purpose. Some believed they were strong machines capable of channeling space energy or acting as an intergalactic broadcaster. 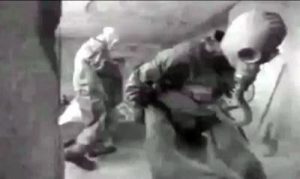 A film from the top-secret “Project ISIS” KGB expedition to Egypt was featured in the Sci-Fi documentary. The tape was allegedly obtained from an anonymous Russian gangster, according to the US broadcaster. The validity of the content of the black and white movie, as well as the testimonies of high-ranking KGB personnel, were guaranteed by Sci-Fi experts, who affirmed that the sarcophagus held the remnants of an alien organism.

A number of KGB personnel may be seen entering an Egyptian burial tomb without wearing protective gloves or masks. When they opened the sarcophagus, deadly gas fumes erupted, making it difficult to breathe. As the gas clouds dissipated, they noticed a mummy laying in the casket and snapped some photos. Later, a team of researchers in protective gear examined the mummy and, most likely, evaluated the radiation levels in the vicinity.

“The footage exposes the most crucial discovery in the history of mankind,” Ivanovich asserted.

“Operation ISIS was utilized to secure alien documents and technology that were kept in a secret tomb on the Giza plateau in the intention of using them for military purposes,” he continued. They discovered the bones of an alien organism that perished around 10,000 years ago.”