The “Genetic Disc,” which reportedly includes knowledge of human genetic development, is one of the most astounding discoveries of the twentieth century. Surprisingly, the disc is supposed to date from the prehistoric past, and the markings on the round stone depict biological phenomena that scientists only learned about after the invention of the microscope.

Is it true that an advanced society existed before humans, or is it just a hoax?

In 1964, an industrial designer named Jaime Gutierrez Lega discovered the so-called Genetic Disc near Bogota, Colombia. He’d been collecting mysterious old objects for decades, and the Black stone disc is one of them. He discovered the majority of the items in Sutatausa, a little-explored and rocky part of Columbia’s Cundinamarca province.

The ‘Genetic Disc,’ as it’s known.

The stone disc is 27 cm in diameter and weighs about 2 kg. It’s composed of lyddite, a highly hard material that’s equivalent to granite yet is brittle due to its multi-layer structure. As a result, according to current technology standards, carving anything out of this material is impossible. Furthermore, the interesting figures on the disc appear to have been stamped on the stone rather than carved.

Symbols depicting the intrauterine development of the fetus at all stages, as well as cell division in all stages of some unknown organisms, can be found on both sides of the disc. On the one hand, there is the depiction of a fetus growing into a humanoid entity. The male and female genital organs are depicted on the disc. The peculiar part is that these creatures’ heads do not resemble those of humans. The image of the Genetic Disc gained notoriety after it was supported by renowned archeological researcher Klaus Dona. Carlo Crespi Croci, a missionary in Ecuador in the mid-twentieth century, could have discovered the disc, according to Swiss author Erich von Däniken. Croci possessed a collection of South American artifacts that did not fit into any of the known archaeological cultures. Stone discs and tablets with ancient designs were among the objects he possessed.

Surprisingly, the disc is dated to the prehistoric age according to carbon dating, although the sperm was first detected in 1677 by Antonie van Leeuwenhoek using a microscope. 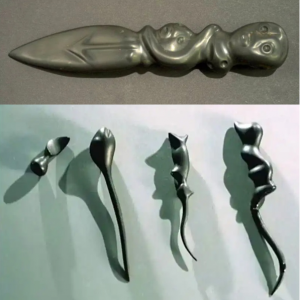 The other ancient alien artifacts from the collection of Gutierrez.

The disc’s validity has always been questioned. To begin with, there is no record of where the disc was discovered. Second, Dr. Vera M.F. Hammer, a mineralogist and curator for the Department of Mineralogy and Petrography at the Natural History Museum in Vienna, said: “My former director, who was a petrologist, said that this rock could be Lydite (a grey to black fine-grained schist) or an artificial product made of these minerals.” I never assigned the disk, or any of these artifacts, to a certain cultural period or made any age statements, as these are not my areas of expertise.”

Klaus has never stated that the disc is a forgery. He presented it to experts at Columbia’s National University, who discovered that the disc was unrelated to any known Columbian tribes in South America. The disc could be at least 6000 years old, according to the researchers.