Many of us follow the ISS cameras’ live feeds on the internet and YouTube. A YouTuber just discovered 7-minute footage. The movie depicts a collision between two spacecraft in the vicinity of the International Space Station. Strangely, NASA did not shut the channel as soon as the ISS cameras broadcasted this video.

Previously, Nasa would cut the stream whenever there was something unusual in the video captured by ISS cameras. Perhaps NASA wanted us to witness these ships!

Alien spaceships or trash in space?

At first, the image of the two objects appears to be a bit transparent, and you could argue that it is a reflection of something within the ISS, but after 4 minutes of the feed, the objects become more plainly solid, and you can also see that the two objects reflect the light of the Sun. 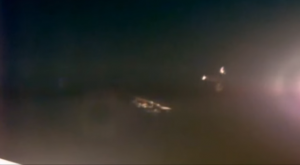 The object in the top right corner of the video is the most intriguing, as it is clearly a spaceship with two spheres linked to it. The other object is not a solid, clear object.

Many observers argue that the two objects are simply space junk from our rockets and satellites, but I disagree because any debris would have a faster or slower speed than the ISS, yet these two spacecraft have the same speed as the ISS.

Another idea is that they are lens flares from the ISS camera that captured these two objects. This is one of the most ridiculous arguments since the lenses attached to ISS cameras are high-end lenses with extremely good performance that prevent the production of such flares.

Were the ISS crew aware of the presence of such objects?

Another concern is if the ISS crew was aware of the presence of these two items. I believe so since such unexpected events must be reported to NASA’s mission control room.