A series of 911 calls were made in SW Michigan in 1994, all of which stated the same thing. Near Lake Michigan, a swarm of flying cylindrical objects had taken over the sky.

Several persons phoned the National Weather Service radar operator to say they saw UFOs in the sky and were afraid for their lives. 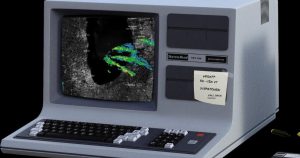 Despite the operator’s best efforts to calm him down, he could not be stopped because he was too terrified. Fortunately, the videotape of the event is still available.