Voyager-1 is the only artificial spacecraft that successfully left the Solar system and is still sending data back to Earth. Launched in 1977, this spacecraft has seen the things that humans cannot imagine. In August 2012, Voyager-1 entered the interstellar space, an area filled with matter ejected during the explosion of stars millions of years ago. A similar cut-off was submitted to Voyager-2 in December 2018. The estimated speed of Voyager-1 is about 62,000 km/hr, and Voyager-2 is 55,000 km/hr.

When Dr. Norman Bergrun mentioned in his book “Ringmakers of Saturn” that a large unidentified flying object is hovering just outside Saturn’s rings taken during Voyager missions, he was deliberately ignored by the scientific community. Surprisingly, NASA scientists are left amazed after the Voyager 1 sent back strange data to Earth far beyond the Solar system. (click here to read the full article)

Recently, NASA has reported that while the probe is still working properly, readings from its readouts from the Attitude Articulation and Control System (AACS) do not appear to match the spacecraft’s movements and orientation, suggesting that the spacecraft is confused about its location in space.

Note: The AACS of the Voyager probes determine the orientation, keeping it pointed towards Earth. The original intent of the designers was to use a new technology called “HYSPACE” (Hybrid Programmable Attitude Control Electronics) for the AACS. HYSPACE combined analog and digital elements and used index register addressing and 4-byte serial architecture. This permitted the use of the same code for all three axes of the AACS.

The space agency said: “The team will continue to monitor the signal closely as they continue to determine whether the invalid data is coming directly from the AACS or another system involved in producing and sending telemetry data. Until the nature of the issue is better understood, the team cannot anticipate whether this might affect how long the spacecraft can collect and transmit science data.”

Voyager-1 is currently 14.5 billion miles (23.3 billion kilometers) from Earth, and it takes light 20 hours and 33 minutes to travel that difference. That means it takes roughly two days to send a message to Voyager-1 and get a response – a delay the mission team is well accustomed to.

“A mystery like this is sort of par for the course at this stage of the Voyager mission,” said Suzanne Dodd, the project manager for Voyager-1 and 2 at NASA’s Jet Propulsion Laboratory in Southern California.

“The spacecraft are both almost 45 years old, which is far beyond what the mission planners anticipated. We’re also in interstellar space – a high-radiation environment that no spacecraft have flown in before. So there are some big challenges for the engineering team. But I think if there’s a way to solve this issue with the AACS, our team will find it.”

The issue has not triggered any onboard fault protection systems, which are designed to put the spacecraft into “safe mode,” a state where only essential operations are carried out, giving engineers time to diagnose an issue. Voyager-1’s signal has not weakened either, which suggests the high-gain antenna remains in its prescribed orientation with Earth.

“Until the nature of the problem is better understood, the team cannot anticipate whether this could affect how long the spacecraft can collect and transmit science data,” NASA said. Dodd and her team hope to discover what is driving Earth’s robotic emissary to send out junk data. “There are some big challenges for the engineering team. But I think if there’s a way to solve this issue with the AACS, our team will find it.”

Are aliens behind the Voyager-1’s mysterious data?
Although NASA is trying to solve the mystery, the involvement of extraterrestrials is a hot topic for conspiracy theorists. In 2010, The Telegraph published an article where a UFO expert from Germany Hartwig Hausdorf claimed that the reason Voyager-2 had been sending strange messages that confused scientists was because it had been taken over by extraterrestrial life. 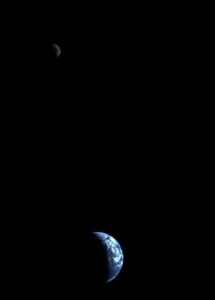 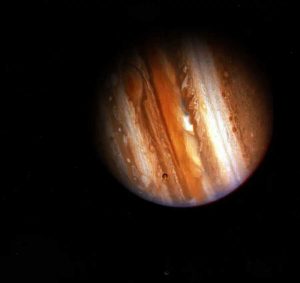 Our crescent Earth and moon in the first picture of its kind ever captured by a spacecraft. Taken on Sept. 18, 1977, 7 million miles (12 million km) away from Earth.

Voyager 1 Send Mysterious Data To
NASA claimed that a software problem with the flight data system was the cause, but Mr. Hausdorf believed it could be the work of aliens. This is because all other parts of the spacecraft appear to be functioning fine. Voyager-2 carries a disk with greetings in 55 languages (A golden phonograph record was attached to each of the Voyager) on it in case the craft encounters other life forms.

NASA announced that Voyager-2 had flipped one of its bits of memory the wrong way. “A value in a single memory location was changed from a 0 to a 1.” It is still unknown how this single bit was flipped but the scientists believe the cosmic ray may have caused this interference.

Additionally, Voyager-2 was on its way to exit the Solar system, where the chances to be hit by highly energetic charged particles and get computer systems damaged were high. It happened with NASA’s Mars Reconnaissance Orbiter in 2009, when it put itself into a limited-activity mode that is an automated safety response after it was hit by a cosmic ray event.

Can alien civilization change the Earthly probes’ programming?
In 1948-49, a mathematician, physicist, computer scientist, and engineer John von Neumann introduced to the world his idea of “Universal Assemblers,” a species of self-replicating robots. Von Neumann’s ideas and notes were later compiled in a book titled “Theory of self-reproducing automata,” published in 1966 (after his death). In time, this theory would have implications for the Search for Extraterrestrial Intelligence (SETI), with theorists stating that advanced intelligence must have already deployed such probes.

According to Berserker’s hypothesis, we have not heard from any alien civilizations because they have been wiped out by killer robots. There is also a possibility that probes would take the form of “benign lurkers” watching planet Earth from a distance. These probes could have been dispatched from a nearby star system as it made a close pass to our Solar System (Benford, 2021a, 2021b). A variant on the “malignant lurkers” suggests that extraterrestrials might dispatch armed probes (aka. “berserker probes”) to investigate Earth as a potential threat and destroy it.