In Egypt, a Spanish-Italian archaeological team discovers an identical replica of the Tomb of Osiris. The tomb itself is a massive multi-level construction with several rooms and tunnels.

It has a large hall with five massive pillars holding it together, as well as a stairway going down to the funeral complex, which is embellished with carvings of Osiris. The chamber was also adorned with demon reliefs, which were placed there to protect the deceased’s body. 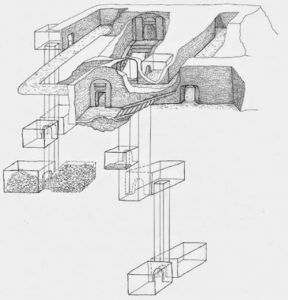 According to scholars, the tomb was constructed between 760 BC and 525 BC, which corresponds to the 25th and 26th dynasties’ reigns.

This estimate is based on the architectural and symbolic similarities between this tomb and another Osiris-related funerary complex, Oseiron, in the Luxor city of Abydos.

The archaeological team intends to return to the time-worm funerary complex as soon as possible to complete their investigation. This Man Recorded a Mysterious UFO In New York Mills